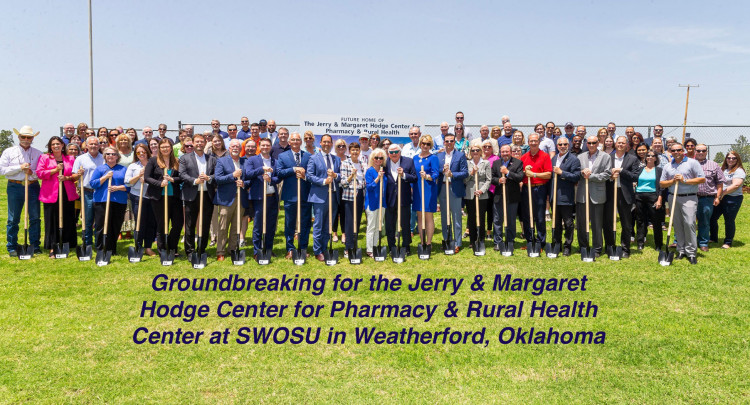 The Groundbreaking for the Jerry & Margaret Hodge Center

The ceremony was held at 1:30 p.m. in the lobby of Henrietta Mann Hall with remarks from SWOSU President Dr. Diana “Diane” Lovell. She was joined by Jerry and Margaret Hodge and members of the Regional University System of Oklahoma (RUSO) Board of Regents as well as elected officials and local dignitaries.

The Oklahoma State Legislature has approved $10 million in pandemic relief funds to assist Southwestern Oklahoma State University (SWOSU) with establishing a new rural healthcare center on the Weatherford campus. SWOSU will combine the $10 million in ARPA funding with $5 million in private support already received from SWOSU alumnus Jerry Hodge and his wife, Margaret, of Amarillo (TX). The Hodges’ contribution, which was announced in 2021, represents the largest charitable gift in SWOSU history. An additional $7 million in support will be provided via the Yes! Weatherford economic development sales tax extension initiative, which was approved by Weatherford voters in 2020.

The Hodge Center project will enable SWOSU’s healthcare programs in nursing and allied health to substantially increase capacity and will significantly enhance the university’s pharmacy doctoral program. The building will also expand the community health services of the SWOSU Center for Rural Health. The center will allow for more strategic partnerships with other higher education institutions that could lead to SWOSU students having access to a physician’s assistant program and the possibility of a dual degrees program through the SWOSU College of Pharmacy.
The Hodge Center will be located on the campus corner at the intersection of Davis and Caddo streets.
SWOSU pharmacy program was established in 1939 and has over 6,000 graduates. It is accredited by the Accreditation Council for Pharmacy Education and is a member of the American Association of Colleges of Pharmacy. It offers a Doctor of Pharmacy (PharmD) degree as well as a PharmD/MBA dual degree.