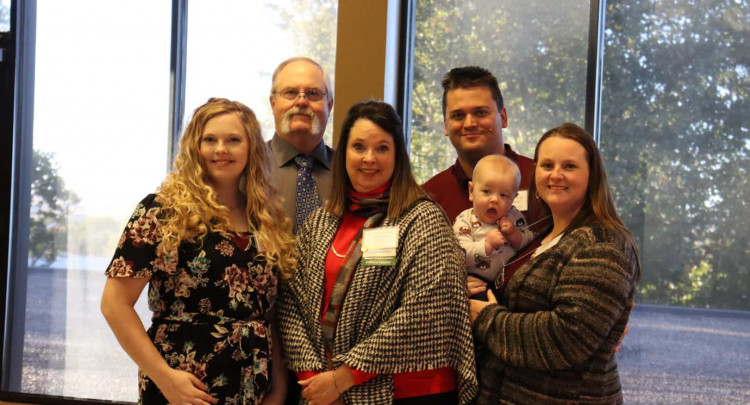 Shanna Hamilton, who is a Lifetime Member of the SW Pharmacy Alumni Association stated, “It is truly an honor and a privilege to represent SWOSU College of Pharmacy.”

SWOSU Pharmacy Graduate (December 1992) Shanna Hamilton of Amarillo (TX) was one of three recipients who was recognized by the SW Pharmacy Alumni Association and SWOSU College of Pharmacy with the 2021 Professional Achievement Award. This award recognizes pharmacy alumni for their professional achievement, who also personify the SWOSU pharmacy school’s tradition of excellence.

Shanna served as the director of the Covenant Home Infusion Pharmacy in Lubbock for many years, where she was recognized with honors, including the Leadership Excellence Award. Over the years, Shanna has also been awarded the Bright Idea Award for innovation of the patient care model, the Values in Action Award for recognition of outstanding patient care, The Regional Paragon Award, Outstanding Director with Cardinal Health Care, the Outstanding Patient Educator Award at Hendrick Medical Center, and Who’s Who of employees who make a difference at Hendrick Medical center. She is now in Amarillo as the Pharmacist-in-Charge at Advanced Vital Care Home Infusion Services.

She has also served as a research pharmacist for Texas Tech Health Science Center Internal Medicine and Pulmonology departments while working on a Phase 2 clinical trial for a new drug approval to treat autoimmune disorders, cancer, rheumatoid arthritis, anti-rejection and COVID, as well as FDA approved drugs seeking an indication for COVID treatment. She is on the speaker bureau for Abbvie/Allergan Anti-infectives division. Allergan published her retrospective study on the readmission rates of patients with ABSSI and the use of Dalvance, called “Clinical Care Models for ASSBI Patients using Dalvance” and it was distributed as marketing material. She also participated in the development of the speaker slide deck for Dalvance and for Billing and Reimbursement of Dalvance.

She has been an active member of the West Texas Pharmacy Association (WTPA) for many years, serving in roles of President, Vice President and Board Member. She has also served as a Continuing Education Speaker for WTPA. In addition to those accolades, she is also a member of Texas Society of Health System Pharmacist and PSHP.

Shanna stated, “I am very dedicated to the future of pharmacy and the education of our healthcare professionals.”

After graduating from Spur High School, Shanna attended SWOSU in Weatherford, Oklahoma. During her time at SWOSU, she was involved in APhA, SWPhA, OPhA, TPA, and Kappa Epsilon.

She has been married to her husband Randy for 35 years. They have two children, Ashlee Barrett and Cheyanne Hamilton, and one grandson, Oliver Thomas Barrett. The pharmacy tradition runs deep in this family as Shanna has followed in her father’s footsteps to become a pharmacist; plus, her daughter Ashlee is a 2019 SWOSU Pharmacy Graduate.