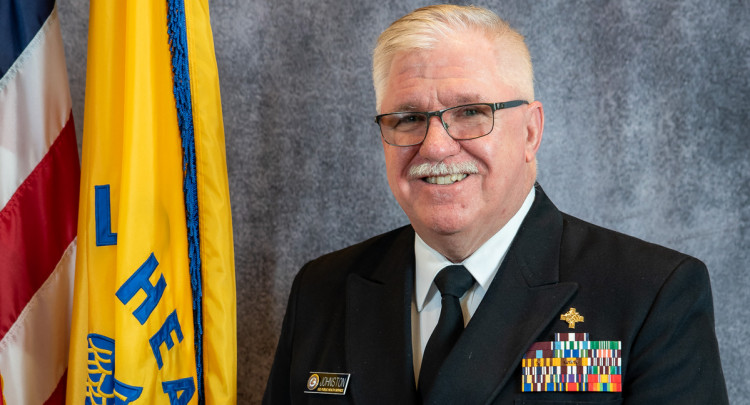 “The numerous achievements and accolades, as well as the immeasurable impact and the outstanding accomplishments he has made in his career, strongly reflect what the Professional Achievement Award intends to recognize,” states a member of the Pharmacy Alumni Awards Selection Committee.

SWOSU Pharmacy Graduate (1981) Martin Johnston of Granbury (TX) was one of three recipients who was recognized by the SW Pharmacy Alumni Association and SWOSU College of Pharmacy with the 2021 Professional Achievement Award. This award recognizes pharmacy alumni for their professional achievement, who also personify the SWOSU pharmacy school’s tradition of excellence.

After a long and successful pharmacy career, CAPT (Ret) Martin Johnston retired from the United States Public Health Service (USPHS) in March 2021. His professional pharmacy journey began after college graduation when he worked 10 years in retail pharmacy before becoming a commissioned officer in the United States Army in March 1991, serving in locations such as Fort Carson (CO) and the Soto Cano Air Force Base in Honduras. In 1994, he joined the U.S. Public Health Service and was stationed in Montana with the Indian Health Service as the Chief Pharmacist for the Fort Peck Indian Reservation. In 1996, Johnston transferred to the Federal Bureau of Prisons (BOP) where he served as the Regional Chief Pharmacist for the Mid-Atlantic Region until 2011 when he was chosen for the inaugural position of Chief of Pharmacy Logistics Support for the BOP. In 2016, he was selected as the Director of Pharmacy Programs for the BOP and served in this role until his retirement.

In 2021, Johnston received the Bureau of Prisons Distinguished Service Medal and in 2020, the Public Health Service Senior Officer of the Year award. Under his guidance, the BOP was awarded the elite 2018 American Pharmacist Association Foundation Pinnacle Award. Prior to his selection as the BOP Director of Pharmacy Programs, in 2011 CAPT Johnston was selected as the Agency’s first Chief of Pharmacy Logistics. While serving as the Chief Pharmacist at FCI Morgantown, CAPT Johnston was selected as the Mid-Atlantic Regional Pharmacist Consultant from 2005-2009. He has several presentations and publications as well as numerous professional memberships.

Additionally, he is a Lifetime Member of the SW Pharmacy Alumni Association. While a student in the pharmacy program, he was on the Dean’s Honor Roll and a member of SWPhA, OPhA, and Phi Delta Chi. He and his wife, Jeryl, live in Granbury, Texas. They have three adult children: William, Martin, and Bart; and six grandchildren: Aiden, Noah, Morgan, Scarlett, Parker, and Edward.