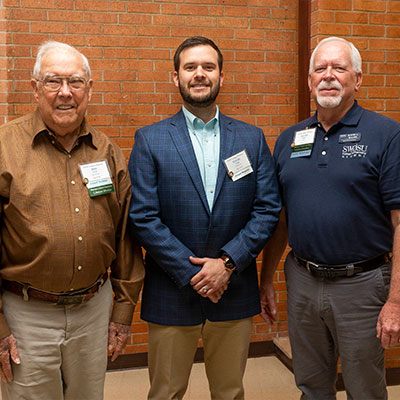 The SWOSU College of Pharmacy Heritage Award recognizes a family with at least two generations of SWOSU pharmacy graduates who have demonstrated a commitment to the University, College of Pharmacy, and the pharmacy profession. The 2021 Recipient is the Coody family: Don Coody (1954) of Edmond, OK and Lucas Coody (2016) of Lawton, OK. The award was presented to Don and Lucas at the Pharmacy Alumni Recognition Ceremony on SWOSU Homecoming Day in Weatherford, Oklahoma.

Don, after graduating from Southwestern pharmacy school in 1954, established a name and reputation for quality care and customer service throughout his pharmacy career, eventually owning 20+ stores. For many years, he was an active member of the Oklahoma Pharmacists Association (OPhA), serving on the Executive Council and numerous committees. For his outstanding service and dedication to OPhA, his community and the pharmacy profession, he was recognized with the nationally known Bowl of Hygeia Award in 2008. Don is a Lifetime Member of the SW Pharmacy Alumni Association. Now retired, he and his wife, Clara Lou, live in Edmond and enjoy time with their family: three children, four grandchildren (including Lucas), and ten great grandchildren.

Lucas graduated from SWOSU College of Pharmacy in 2016. At the Anderson Pharmacy in Lawton, Oklahoma, he worked as the Pharmacist-in-Charge. He has been actively involved with OPhA Legislation, RxSelect Community Pharmacy Enhanced Services, and Oklahoma State Board of Pharmacy committees. Additionally, he has made time to educate pharmacy students on the importance of advocacy in the pharmacy profession and how to get involved with legislation. In 2019, he received the Distinguished Young Pharmacist Award for Oklahoma, presented by the Oklahoma Pharmacist Association. In 2021, he started a new position as Director of Government Affairs at Pharmacy Providers of Oklahoma, which has joined Arete Rx to create AlignRx, the largest independent Pharmacy Services Administrative Organization in the nation. Lucas and his wife, Lauren, live in Lawton with their two daughters.