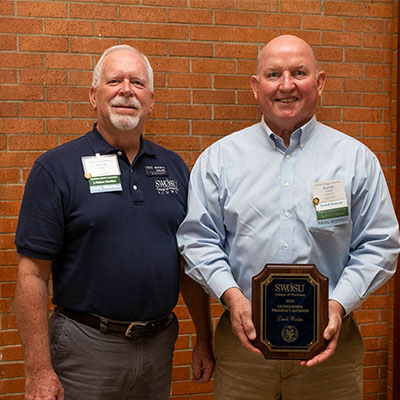 Originally from Wynnewood, Warden graduated from SWOSU in 1979 with a pharmacy degree. While attending SWOSU, he served on Student Senate and was on both the varsity football team (1974-1975) and track team (1975).

He has been a leader in the pharmacy profession as well as with community and volunteer endeavors. Upon SWOSU graduation, he worked at various pharmacies in Wynnewood, Davis, and Ardmore. Since 2000, until his recent retirement, he worked at the Oklahoma City VA Health Care System, where he has been recognized as Supervisor/Manager of the Year.

Beyond his pharmacy career, in addition to being a youth sport coach, high school sports referee for 30 years, and assisting with youth mission trips, he serves as a Boy Scouts of America assistant scoutmaster to mentor scouts to the Eagle Rank. He has hosted England scouts on a trip to the United States and took a group of boy scouts on a trip to England, which was hosted by the scout troop from England. Additionally, he enjoys backpacking in Colorado, Grand Canyon, Philmont Scout Ranch in New Mexico, and Wind River Mountain Range in Wyoming.

Warden is married to Debbie, and they have two children and four grandchildren. Daughter Lindsey is an adult-gerontology acute care advance practice registered nurse, currently working with geriatric trauma patients at OU Health. Son David Jr is currently a pharmacist at a clinic in Southeast Asia, after initially working 11 years at the VA Health Care System. He is married to Britney, and they have four children: Caroline, Colt, Cohen and Conrad.